Menu
Log in
Register
Install the app
You are using an out of date browser. It may not display this or other websites correctly.
You should upgrade or use an alternative browser.

I had planned to take a week off work and head up to a meetup in Seventeen Seventy QLD, organised by FarRiders group, but the FarRider website is down (has been since new owners of the site took over a few weeks ago) and any organisation of the ride being planned outside of the official website was haphazzard, so I decided to go for my own ride, a few days out on the road doing some mile eating. After considering my options (and the nasty weather the eastern states have been experiencing recently) I decided to head to the Nindigully Pub for a burger. For anyone who doesn't know, Nindigully is in Qld, about 500km west of Brisbane, 200km north of Moree, NSW and 40km or so south of St George Qld, and there's not much there aside from a pub and a couple of houses. I've previously ridden through or past Nindigully 4 or 5 times, so I know the way there.

I left Melbourne on Tuesday, around lunchtime and headed straight up the Hume. First stop to stretch the legs near Benalla 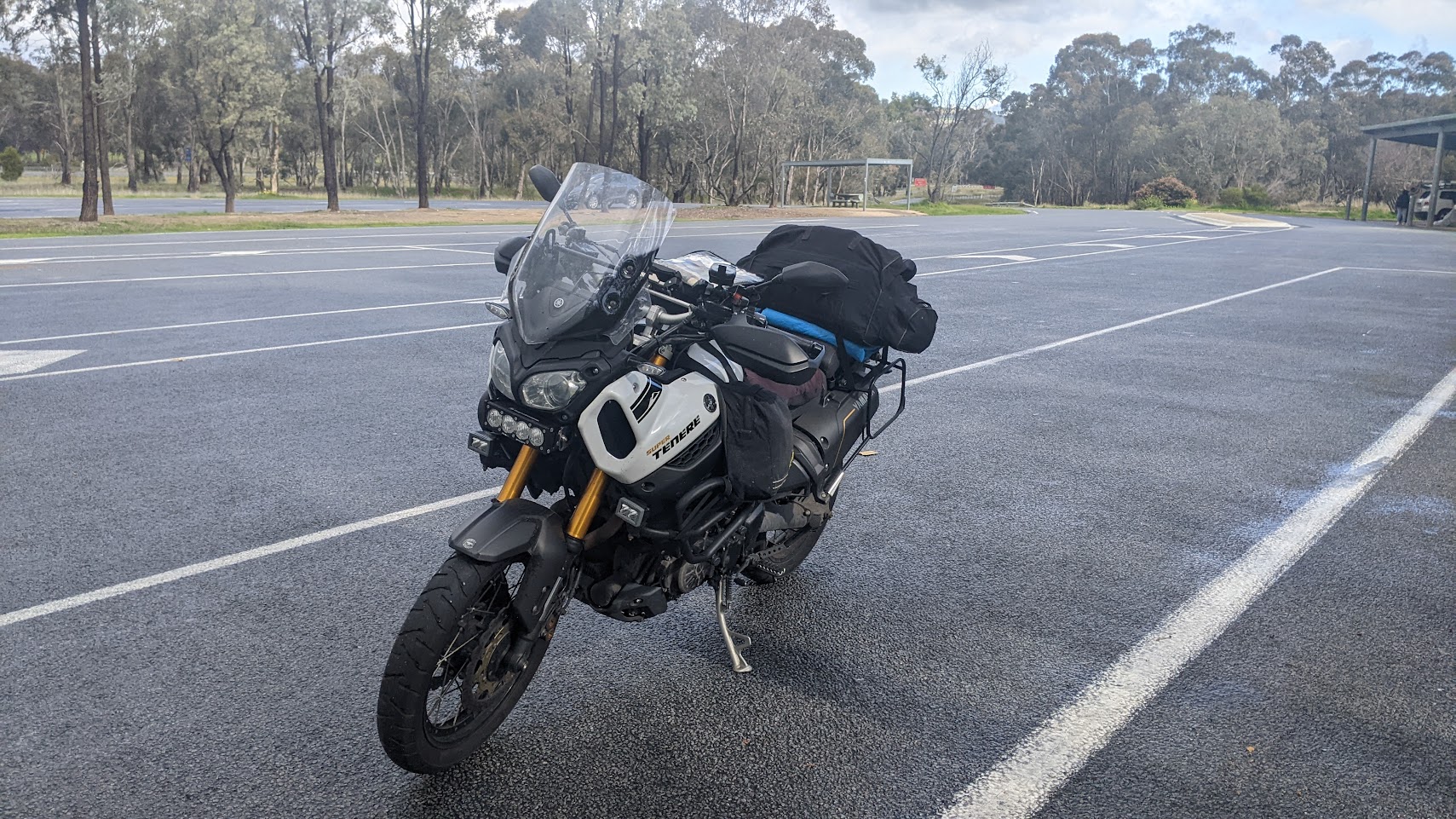 It was a cold day despite the sunshine, and I got to my first nights stop before the sun disappeared and the cold really started. Because I love staying in new places, I had aimed for the motel at Woomargama, NSW, a tiny town about 40km further up the Hume from Albury. 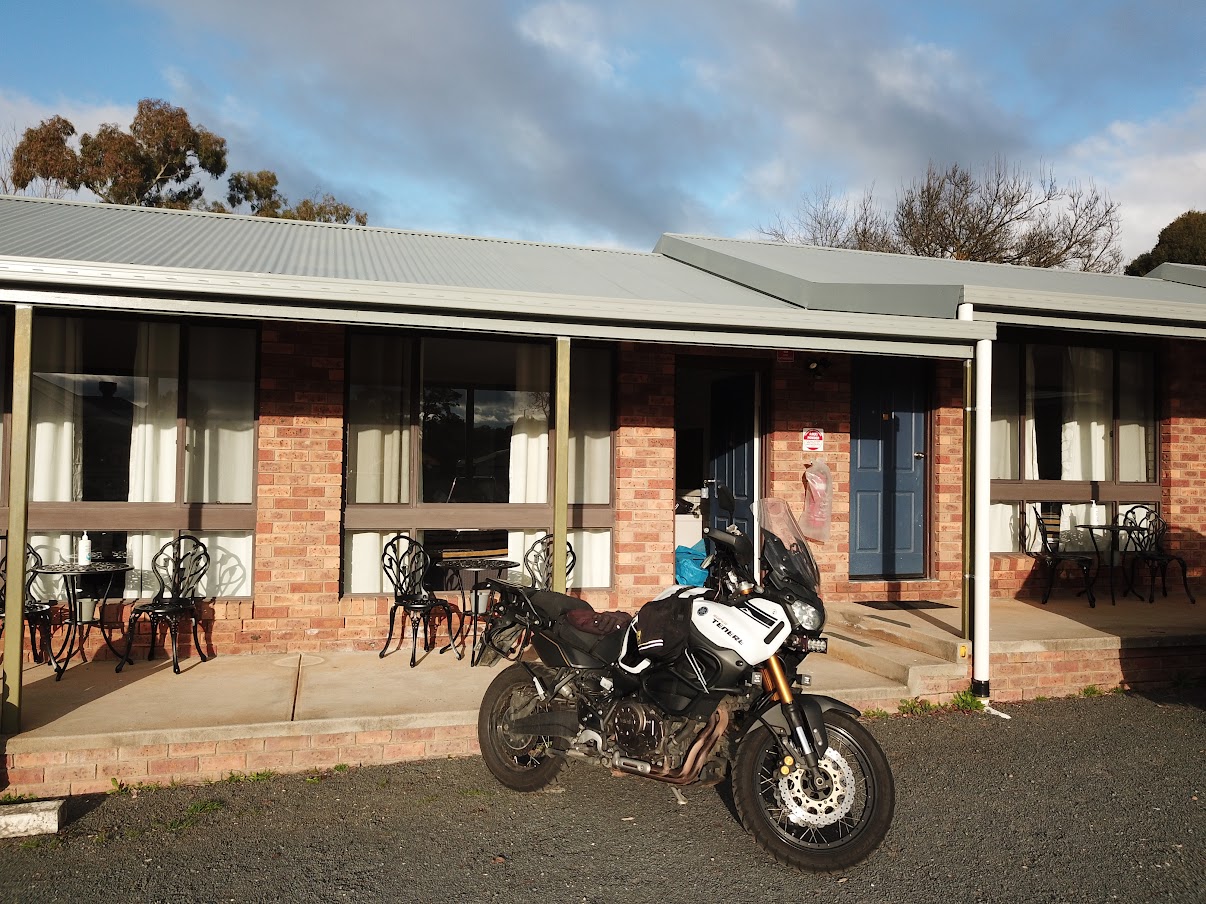 There's not a lot in town, just a motel which is attached to the local pub, and next door to that is an old petrol station which is now only trading as a post office. The chef had the night off, but the pub owners cooked up a tray of snags, a tray of chips, made some salad and pulled out a loaf of bread. For $10 it was all you can eat, just help yourself for the dozen or so patrons in the bar. 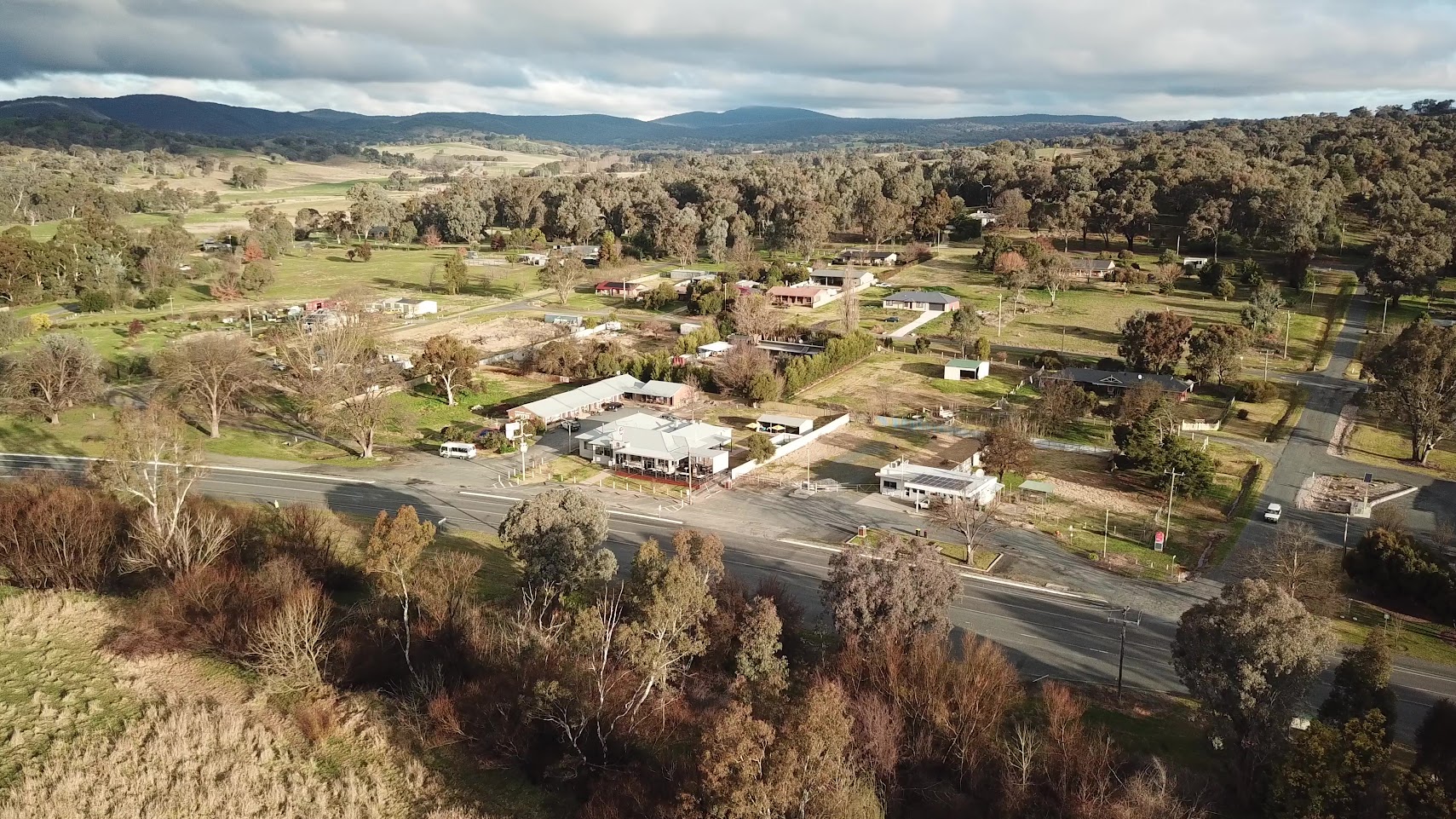 The town sculpture. A few big rocks with a bronze squirrel glider, a possum which glides between trees, which is native to this area. 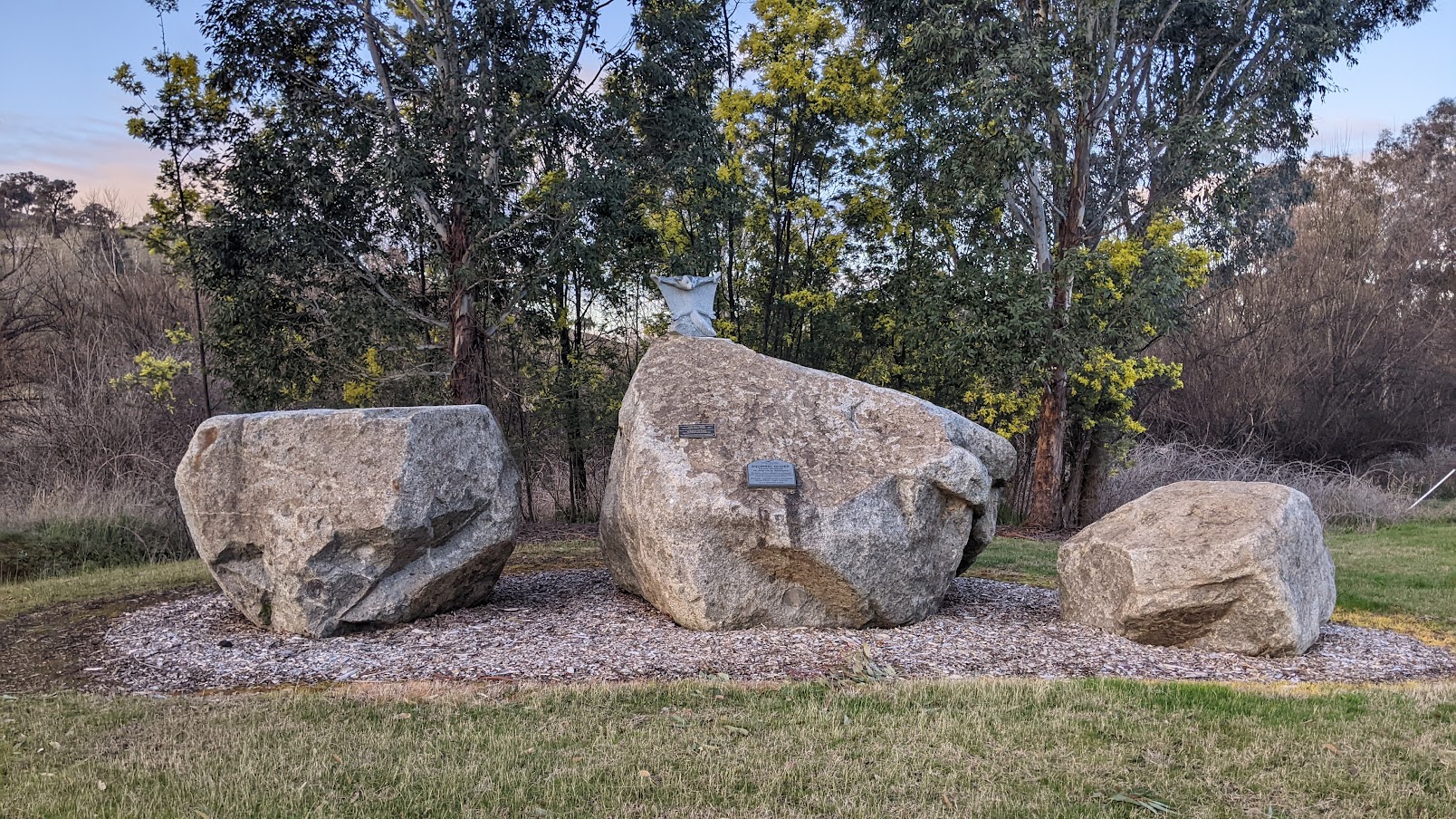 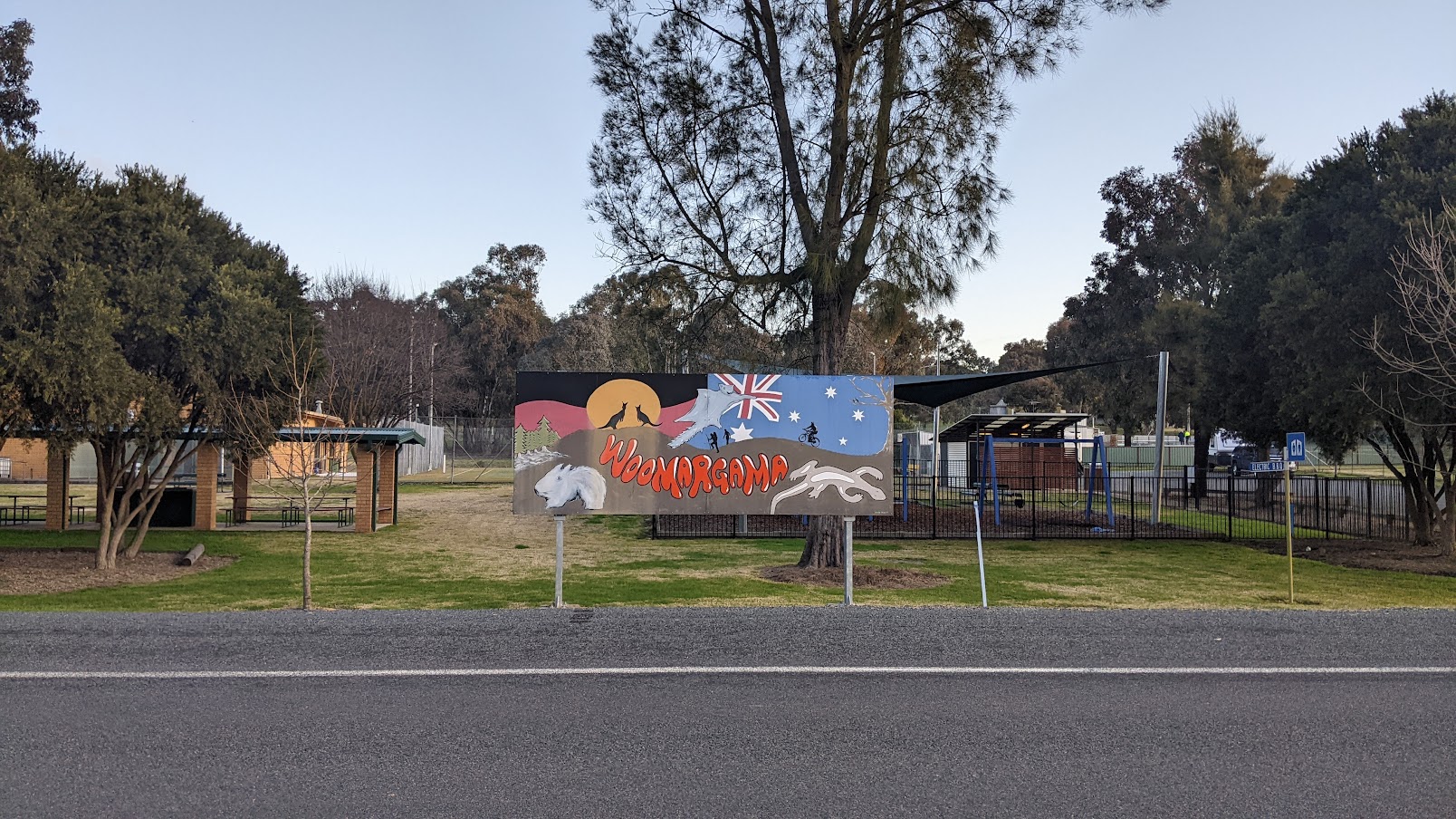 Wednesday morning I was up early and on the road at 6am. It was cold but clear and the LEDs cut through the night nicely. I stayed on the Hume Hwy till Gundagai where I headed off to the west on the Burra Creek Road to Muttama. It's a lovely ride on an undulating and sometimes narrow road through hilly farmland. I bypass Cootamundra and hit the Olympic way at Wallendbeen. At Young I stop for fuel and optimistically, sunscreen. 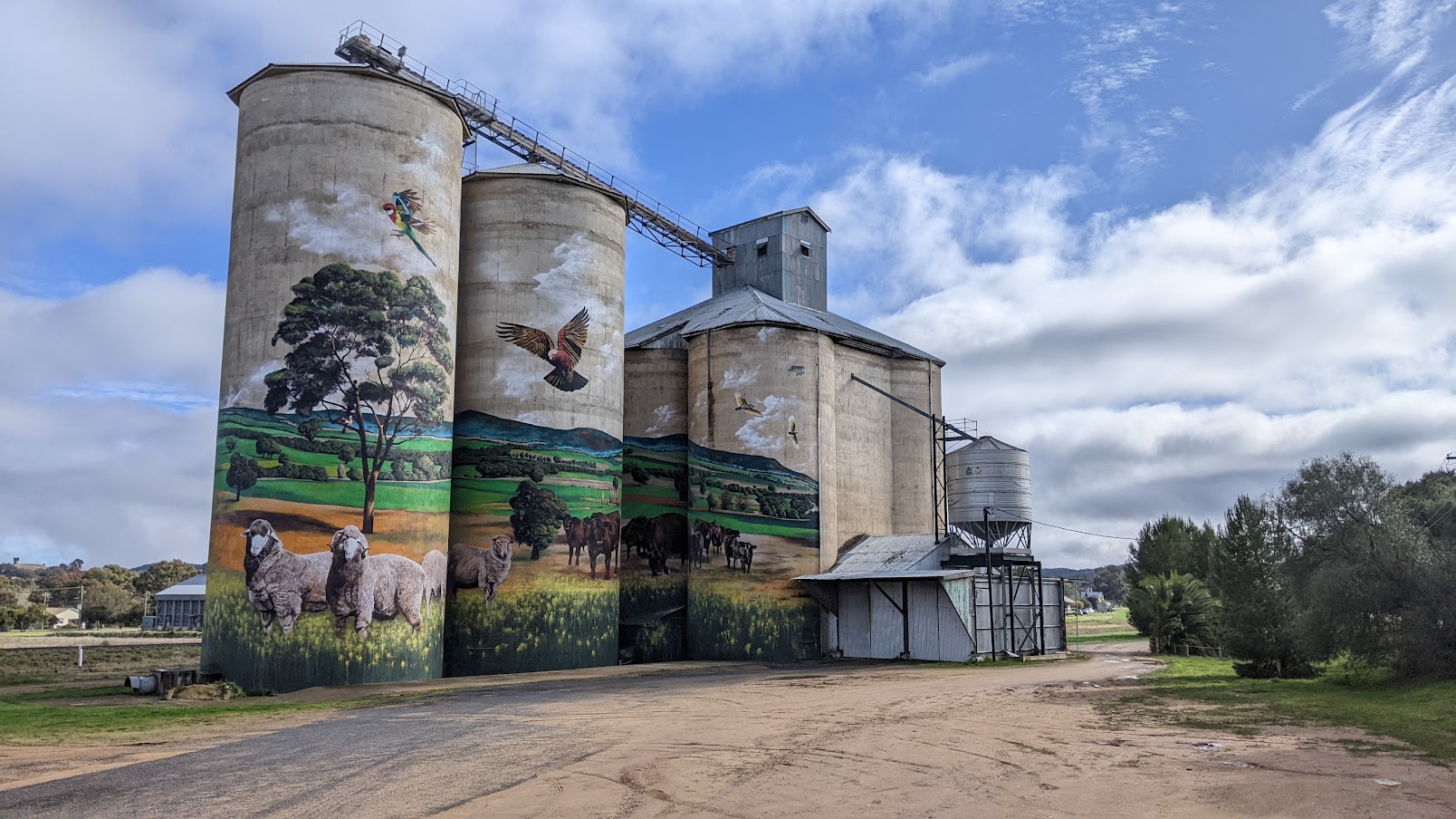 A dinosaur riding a penny farthing. Those bikes sure are old. 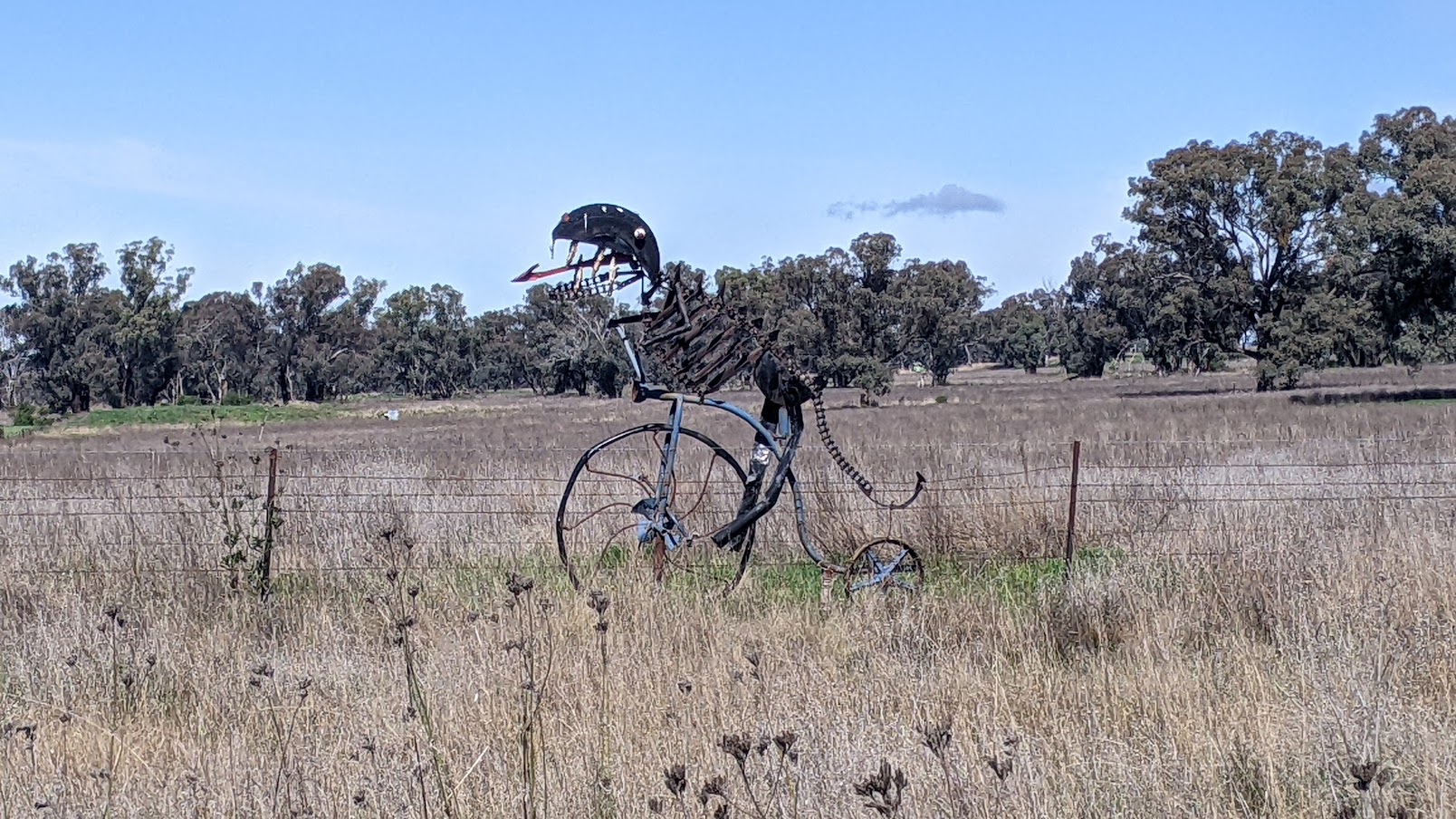 My GPS and the NSW traffic app is showing me that there are delays on the Newell Highway just south of Dubbo because of a hazardous waste spill so I turn off in Parkes and travel via Yeoval to Dubbo.

I stop in The Pilliga Forest and give the drone a fly. 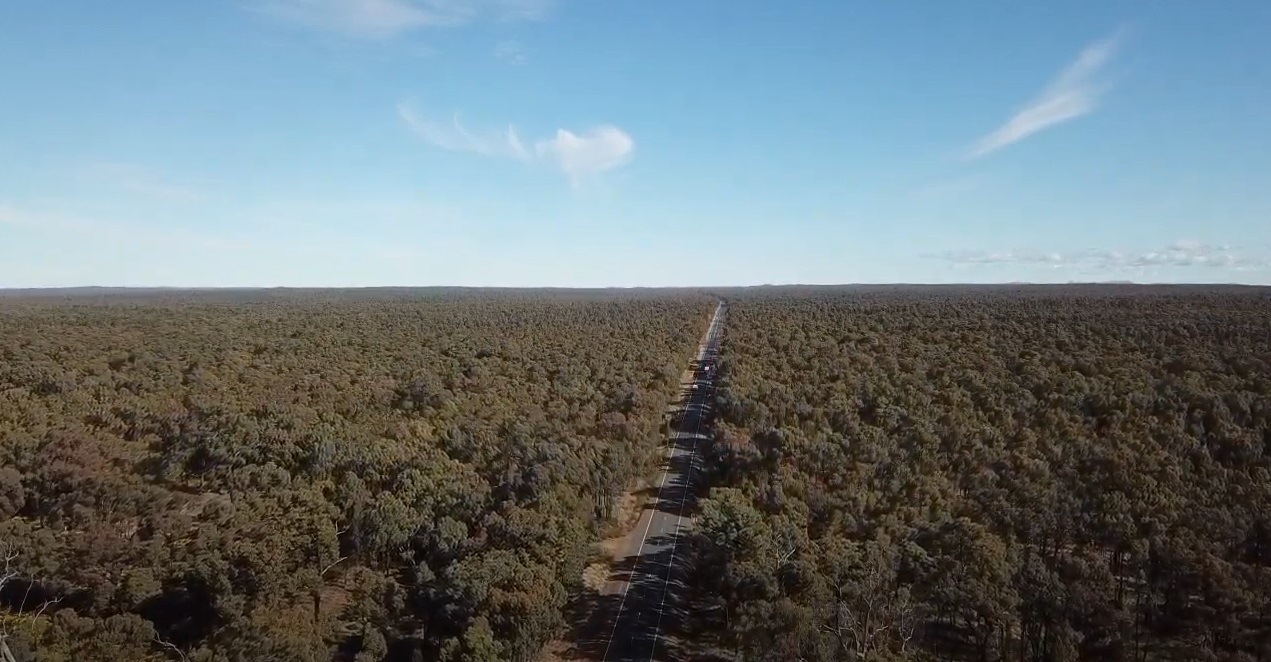 I stopped for the night in Moree. The Sunset here was spectacular. 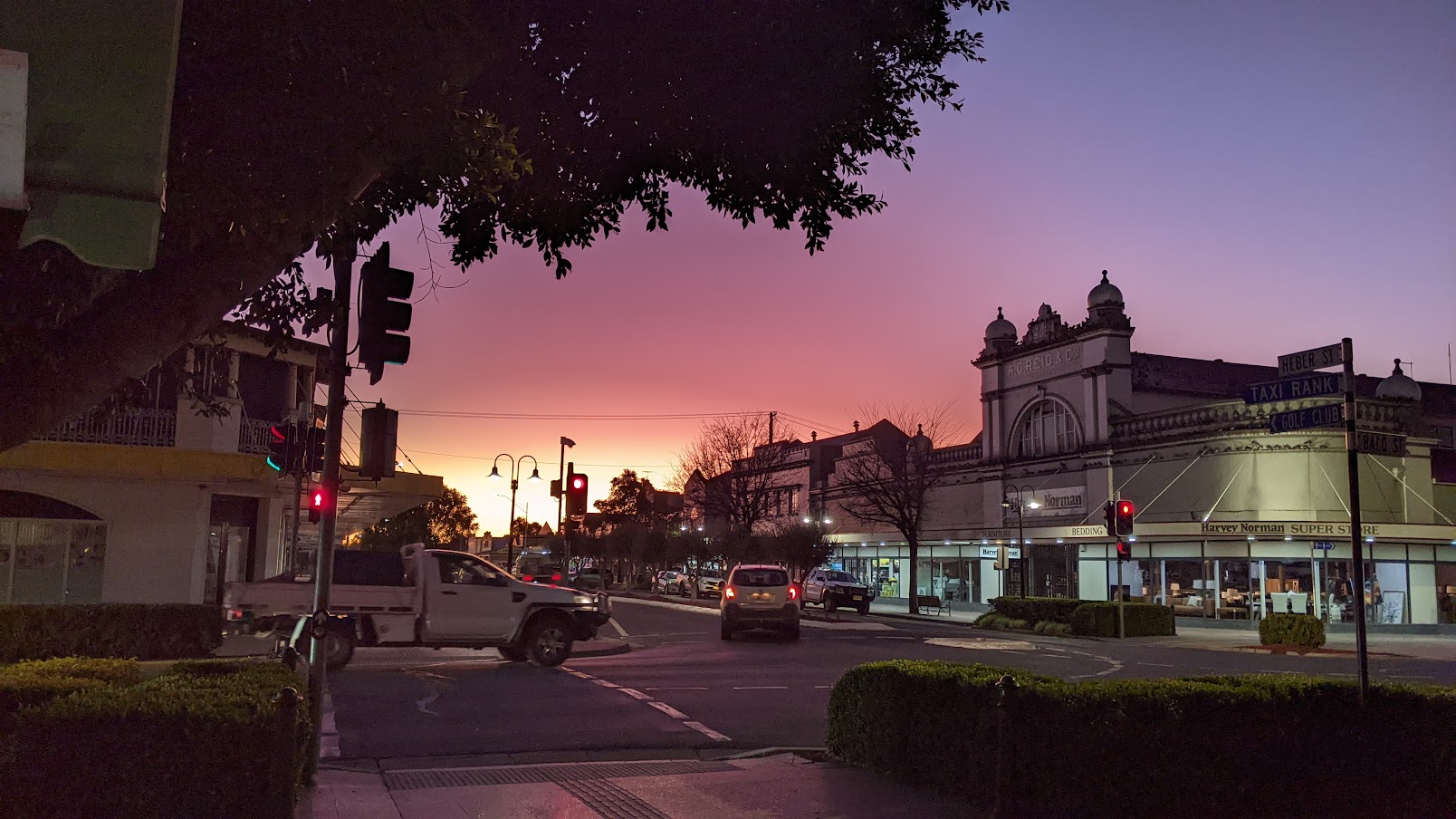 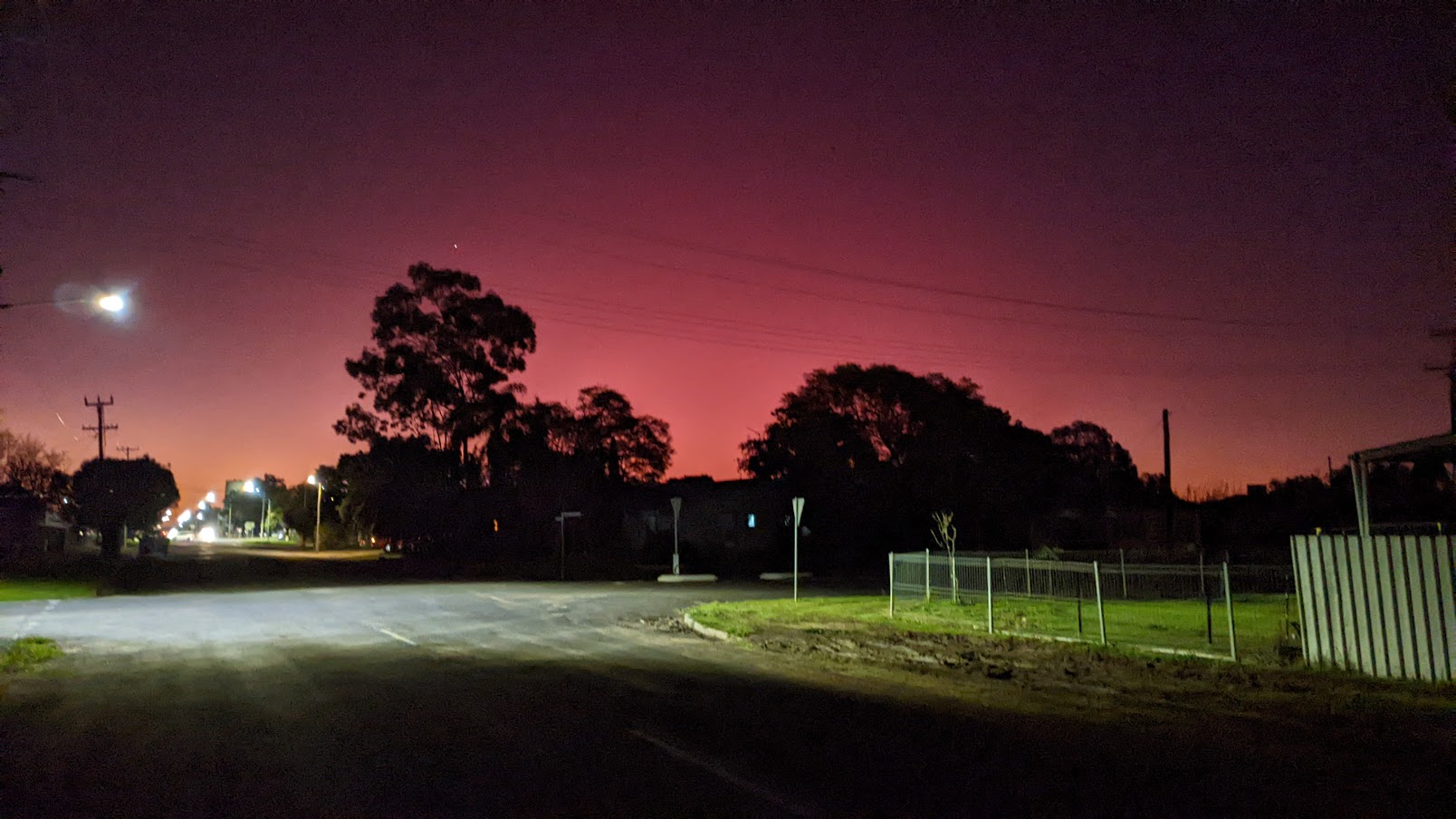 I had a sleep in on Thursday morning, and took a leisurely walk through Moree to check out the scenery.

While most towns have a war memorial in a park, Moree instead has an impressive memorial hall on the main drag 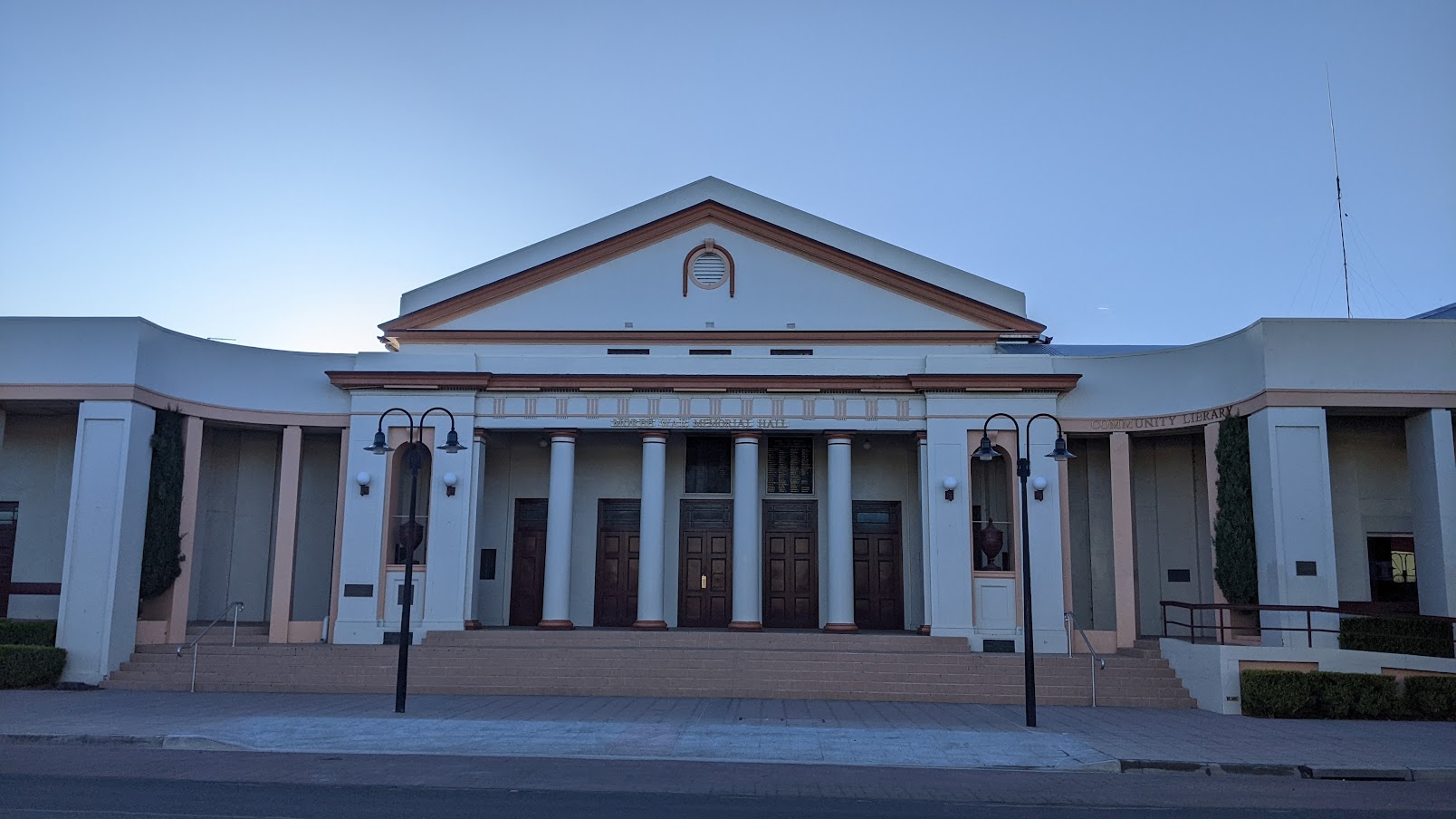 An old steam engine on display. 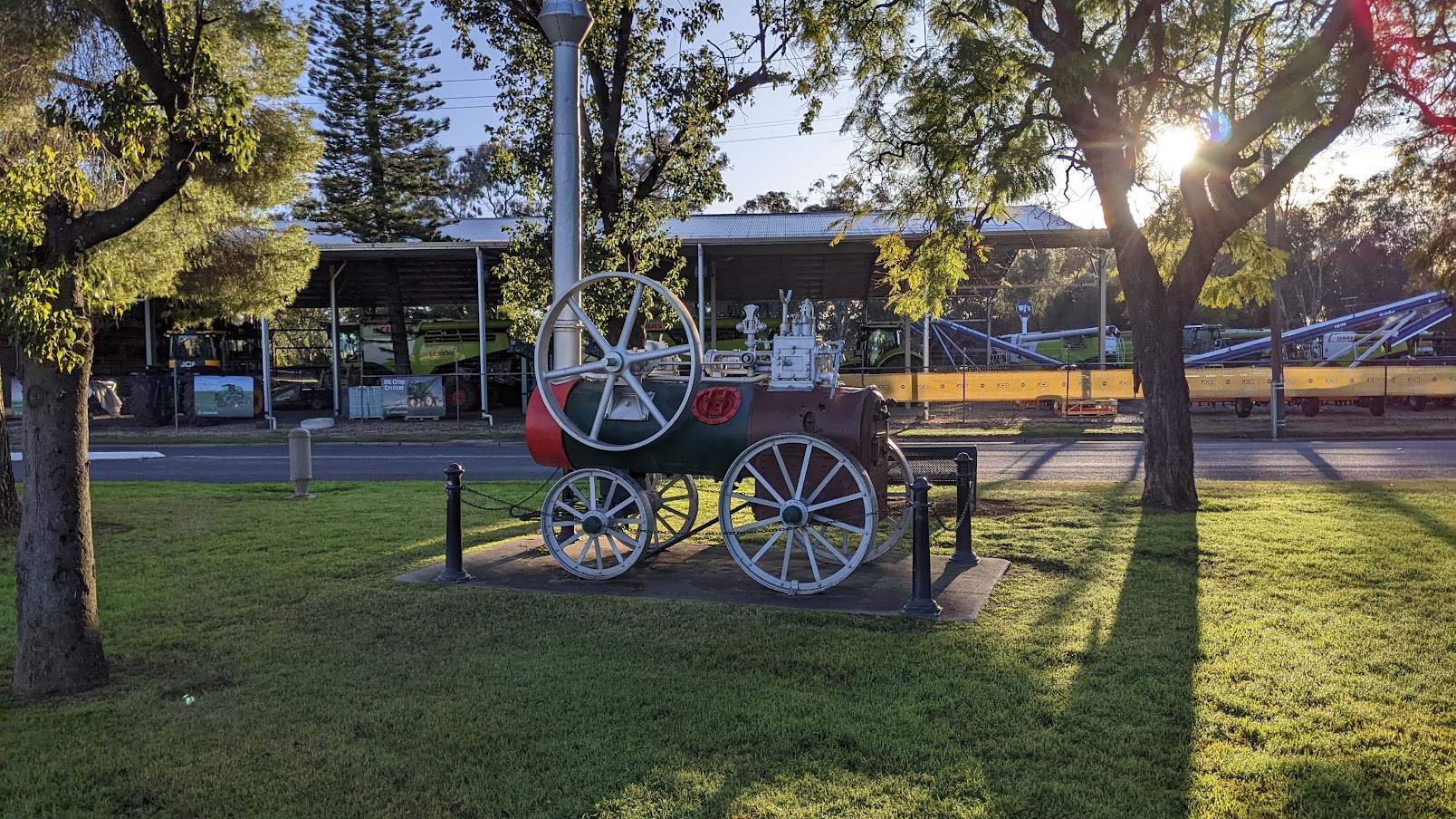 A real throwback to the early days of travelling around Australia. Back in the day every town had a Civic guide in a park on the main street. The civic guide sign for Moree looks like it has been vandalized and the whole front board with map and advertisers has been removed. Behind that was an old board which is now on display and must have been recycled at some stage to construct the new Moree sign. It shows out of date advertising for shops in Moe, Victoria. The advertisers all have 6 digit phone numbers, so it must be dated back to the 70s or maybe earlier. 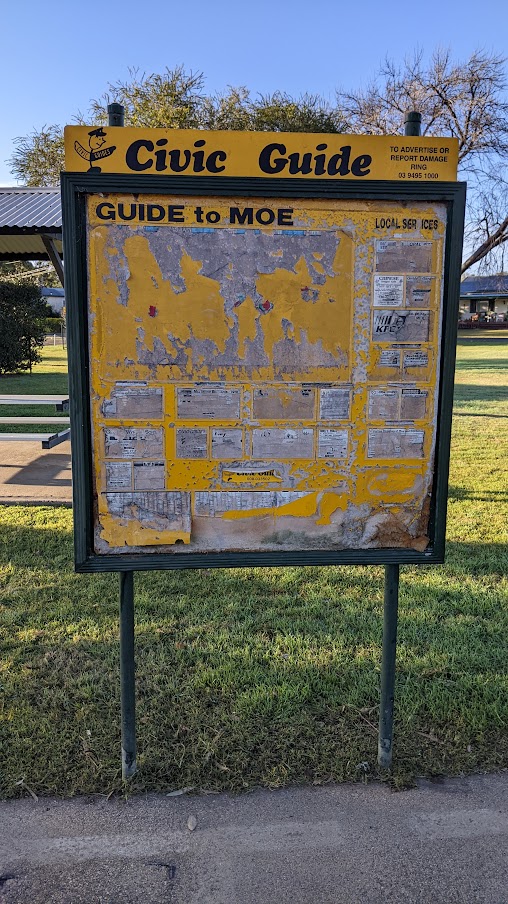 The only sign of flooding I had seen so far on this trip, apart from all of the rivers running quite high and spilling over their banks slightly was up near the Qld NSW border. Lots of potholes on the road evidenced the flood waters had receded, but there was the odd patch of water around the cotton fields which hadn't drained off. 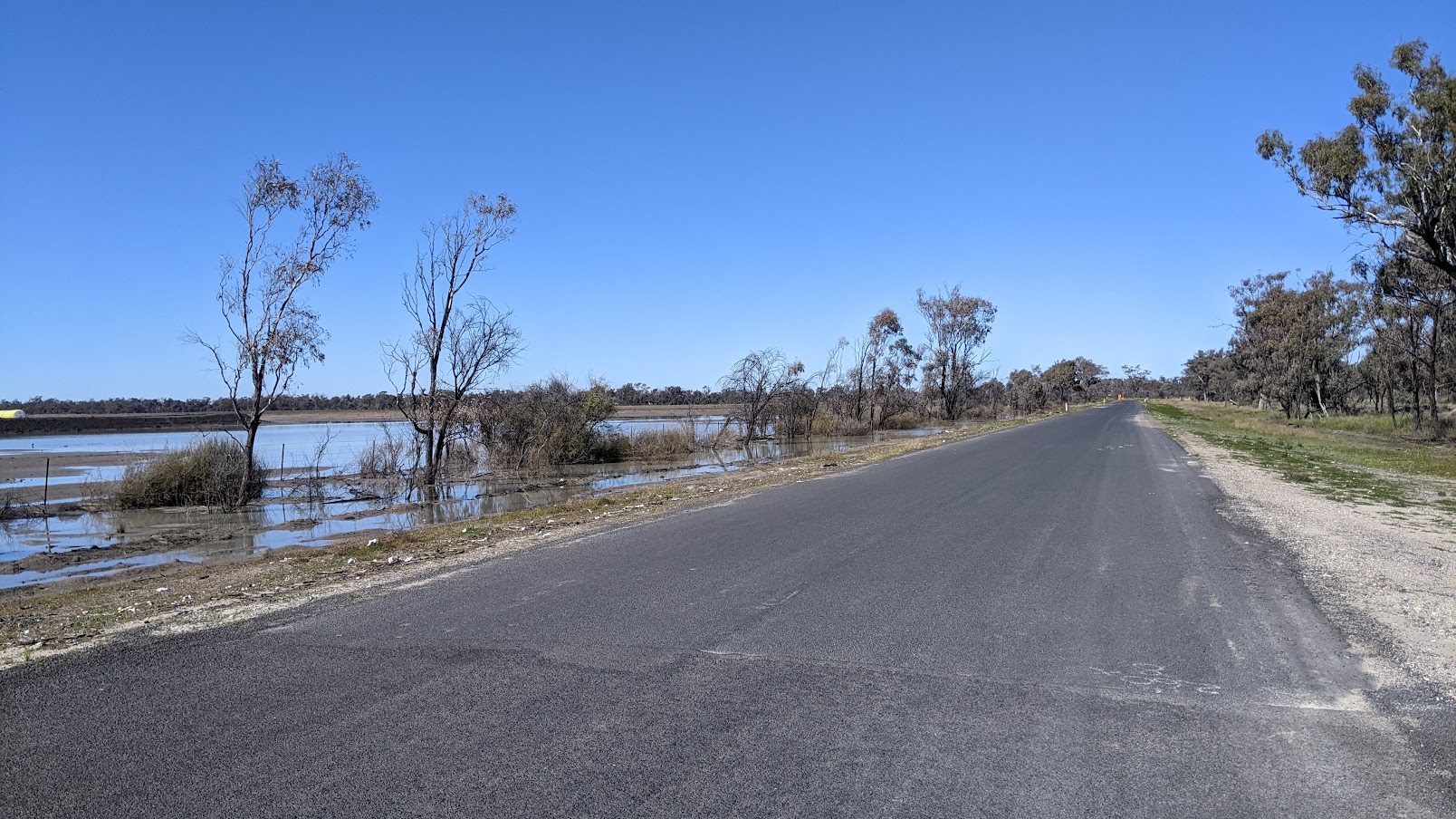 I stopped near South Talwood and this hawk came and circled me for a few minutes. He might have been curious about the odd birdlike object i was unpacking from my bag.

After waiting a few minutes until he had lost interest and flown off I launched the drone. The view over freshly harvested cotton fields. I hadn't seen it from the road, but from the air the harvesters can be seen in action. 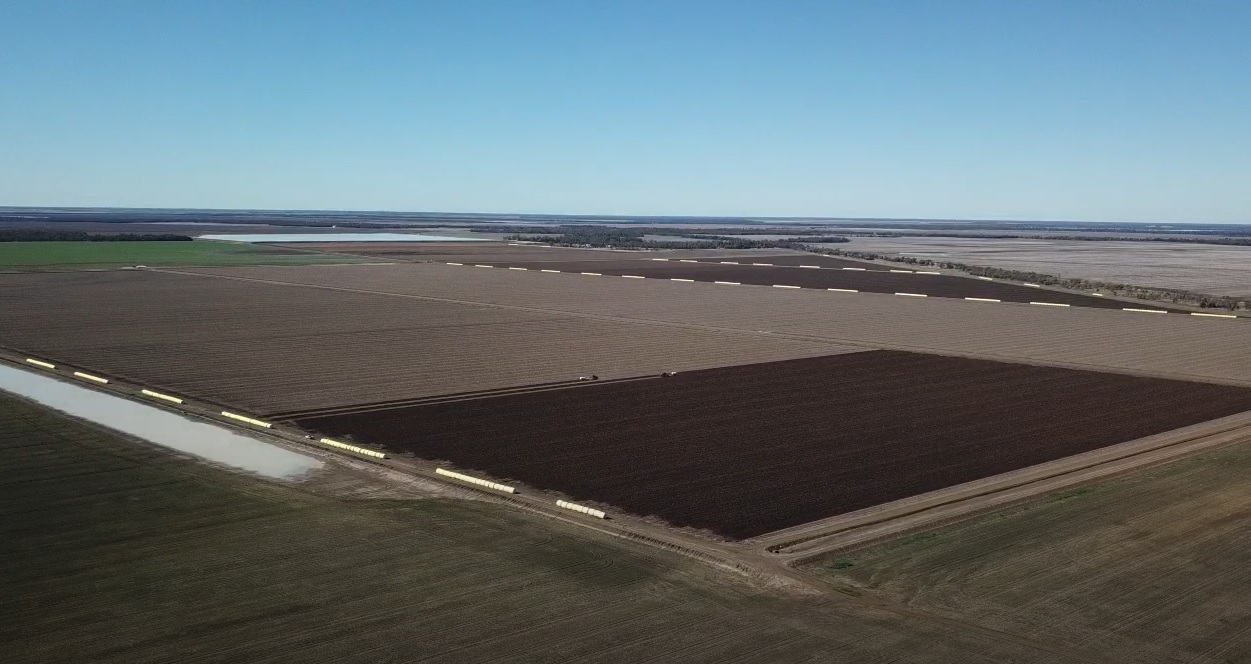 Talwood North. Every small town has that house that has a weird collection of ornaments in the front yard. 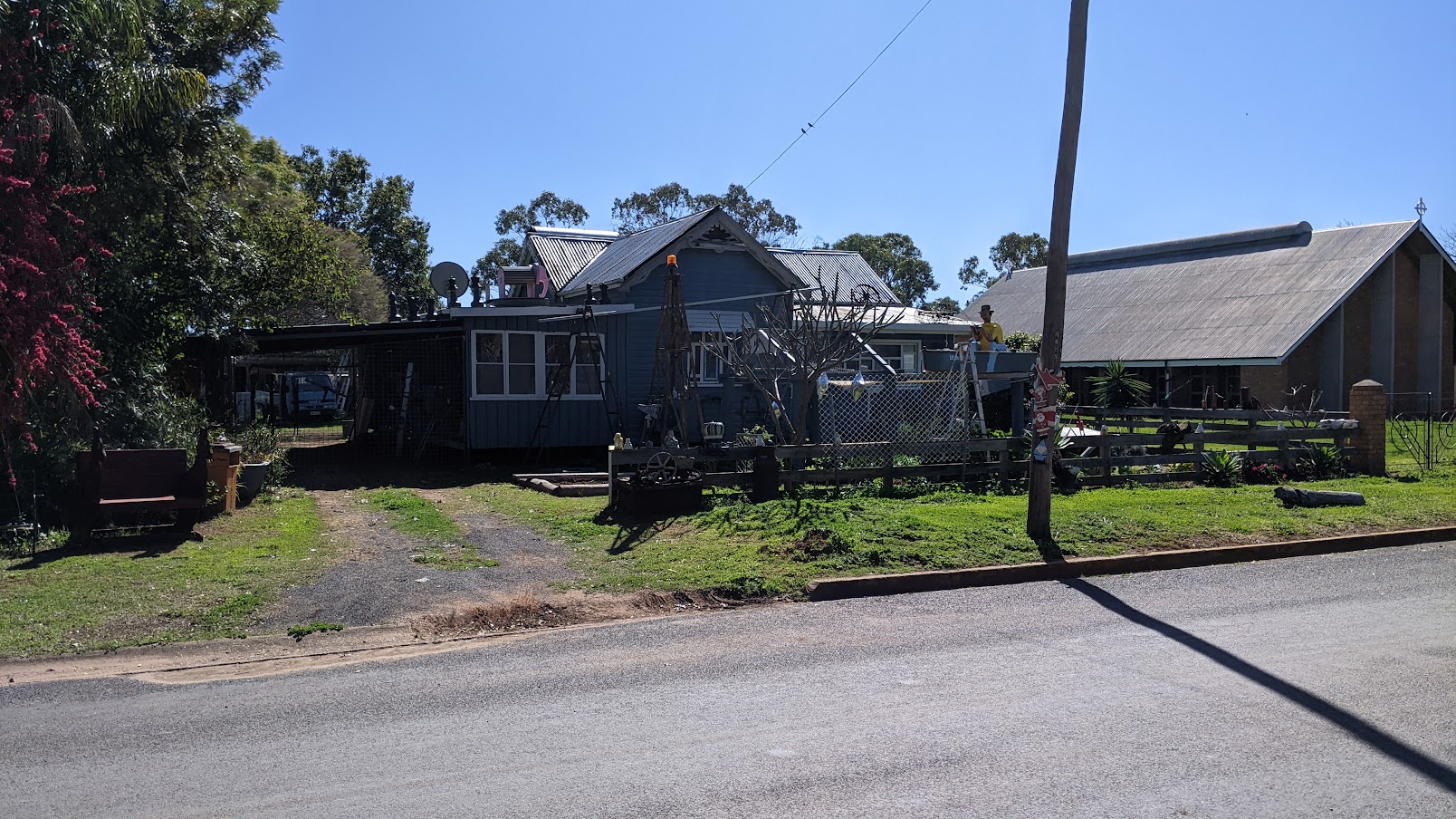 Around 11:30am I arrive at my destination the Nindigully Pub. The kitchen doesn't take any food orders before midday so I occupy myself with a soft drink, a stroll around and some photos. 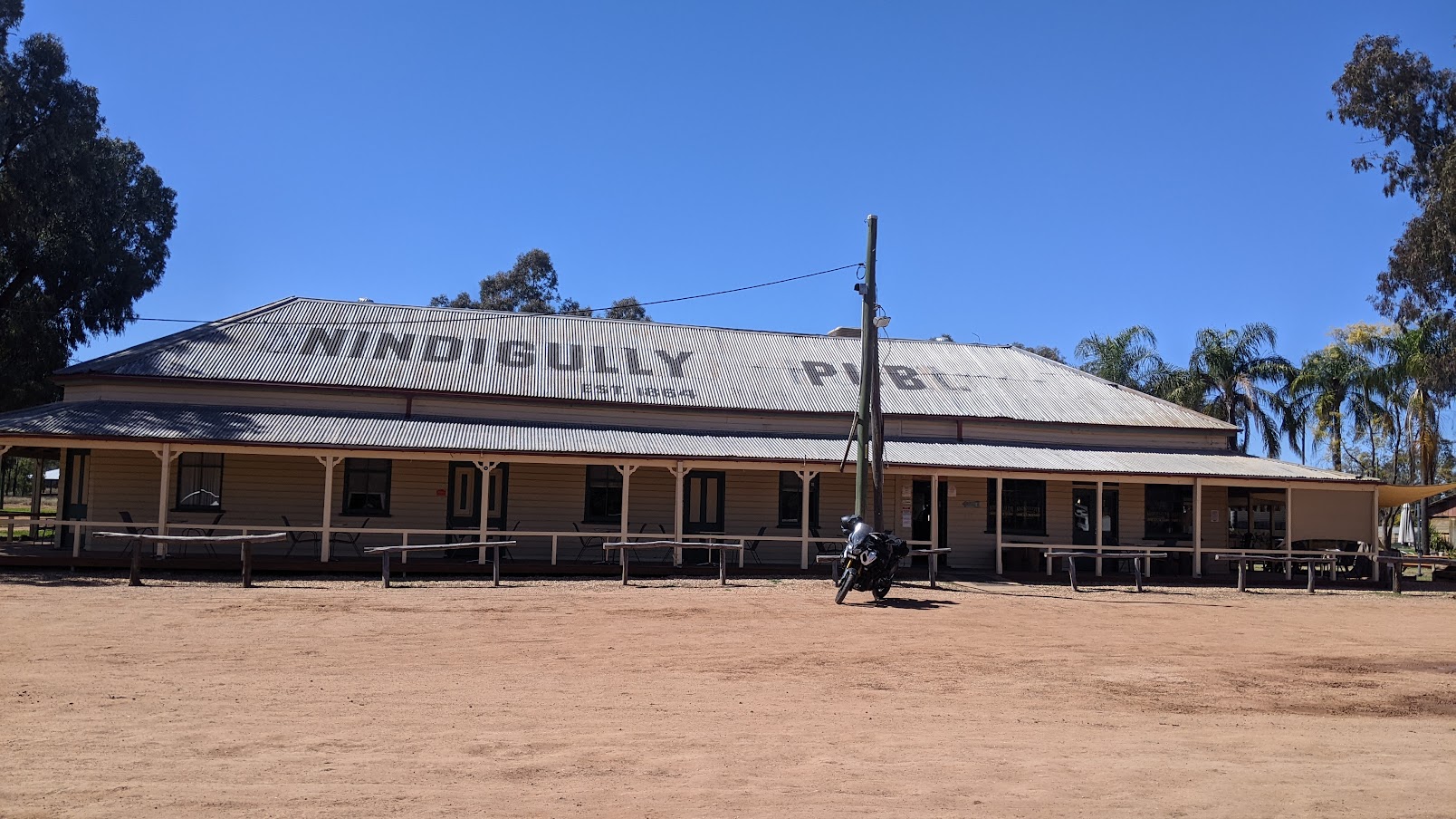 A couple with NSW plates turned up on matching DR650s. They were on their way home from a trip to the Mt Isa Mines Rodeo. They weren't very talkative and didn't stay for lunch. 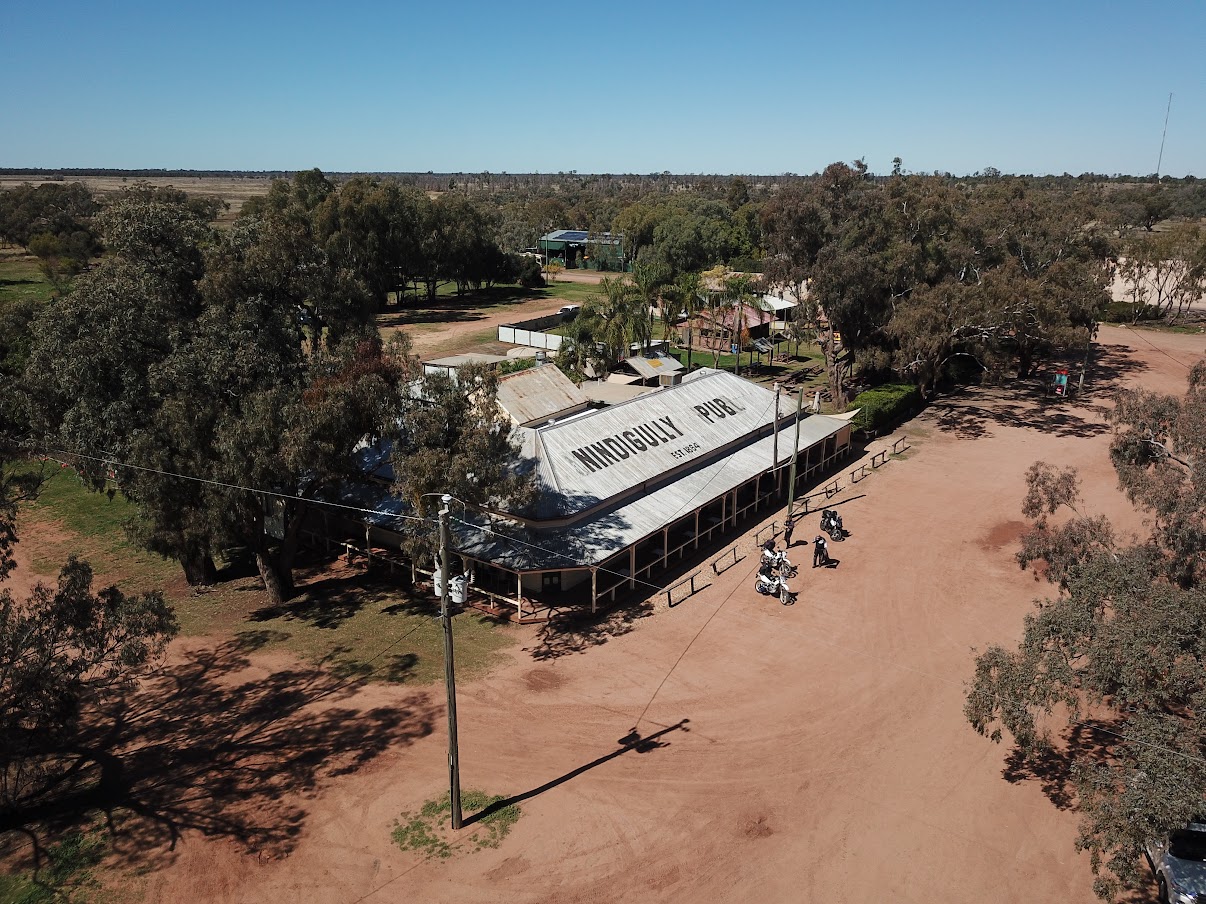 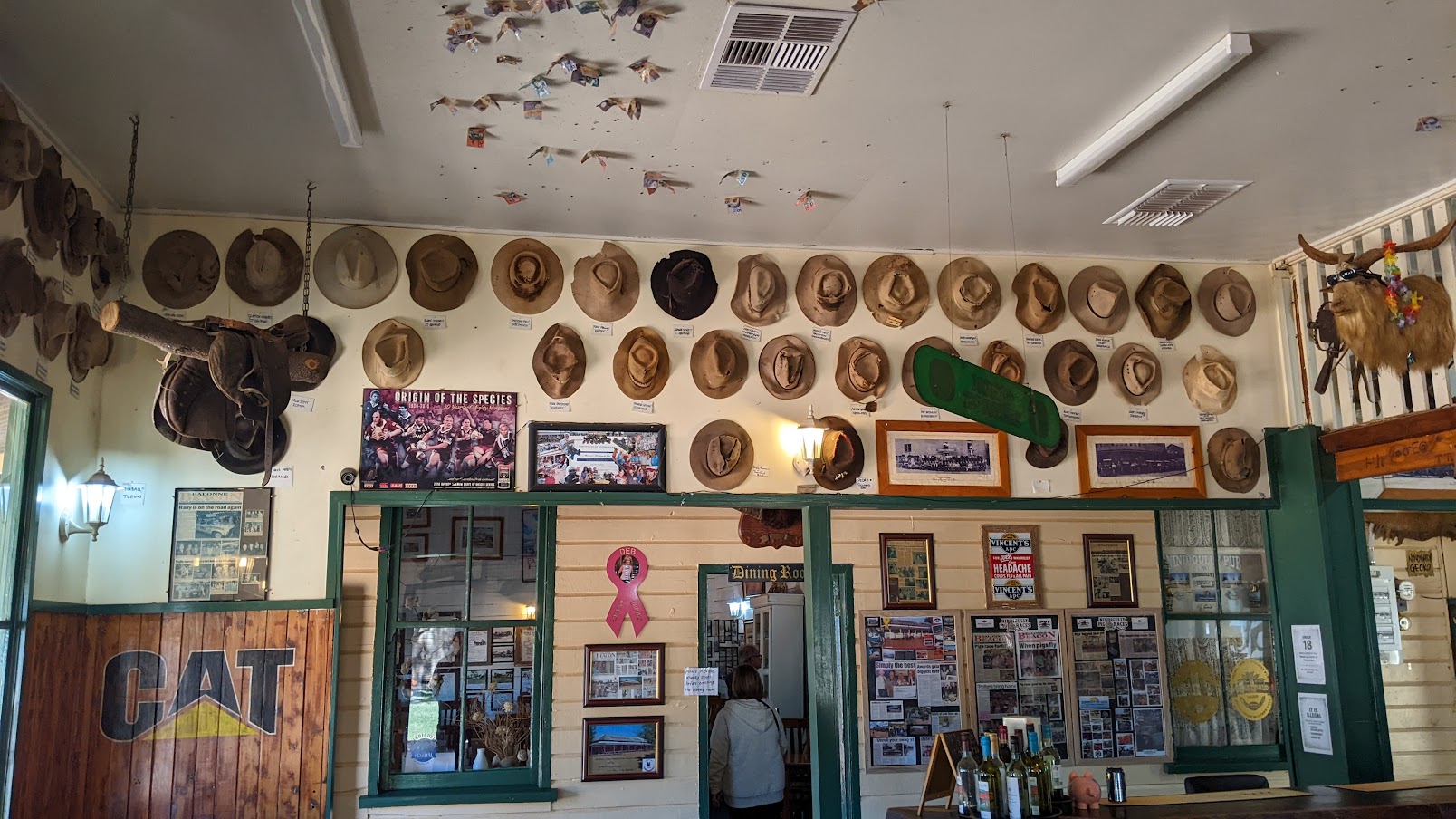 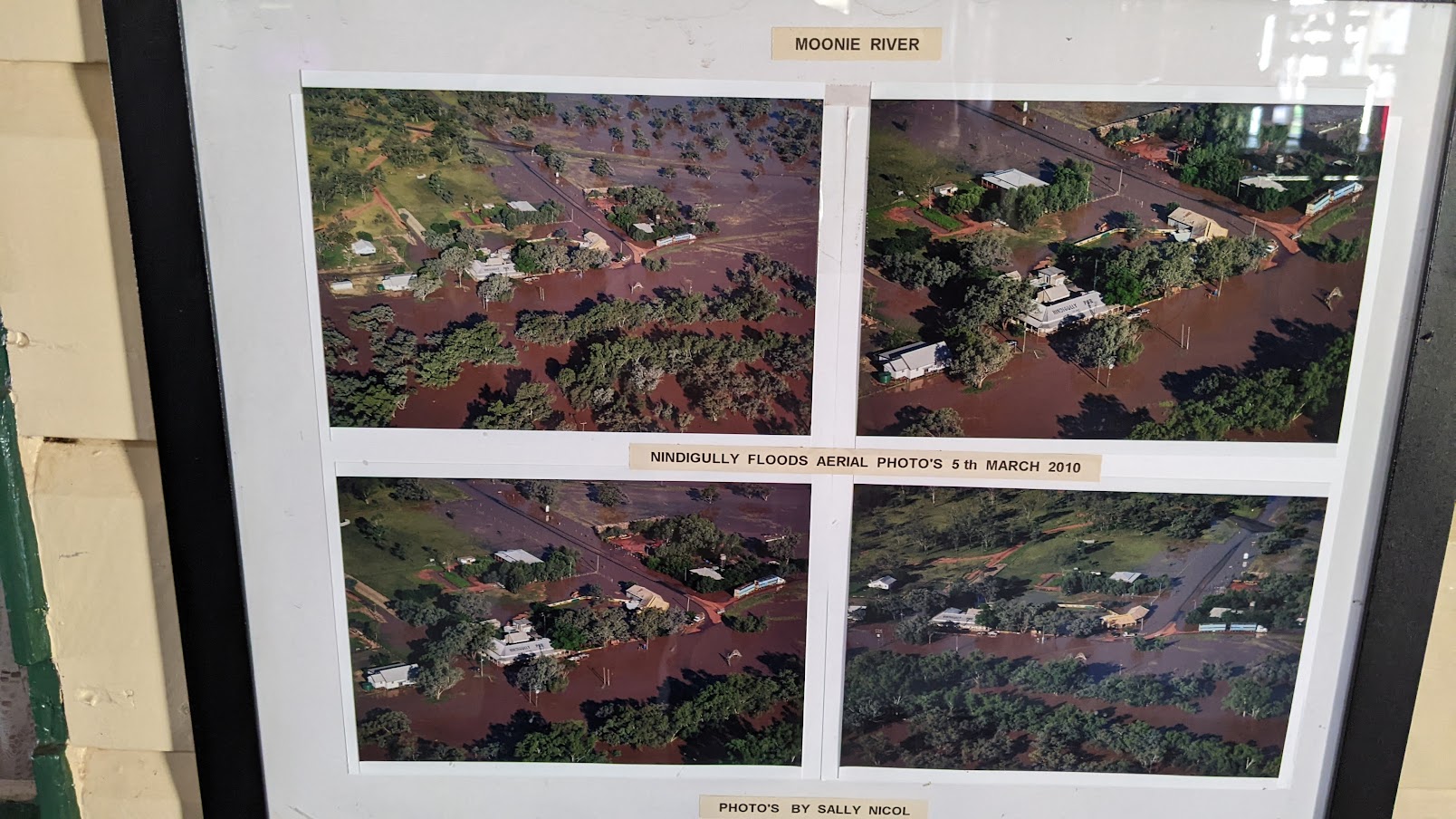 Finally it was time for lunch. The burger was just as I remembered. and washed it down with a coldie before hitting the road again and starting my trip home. 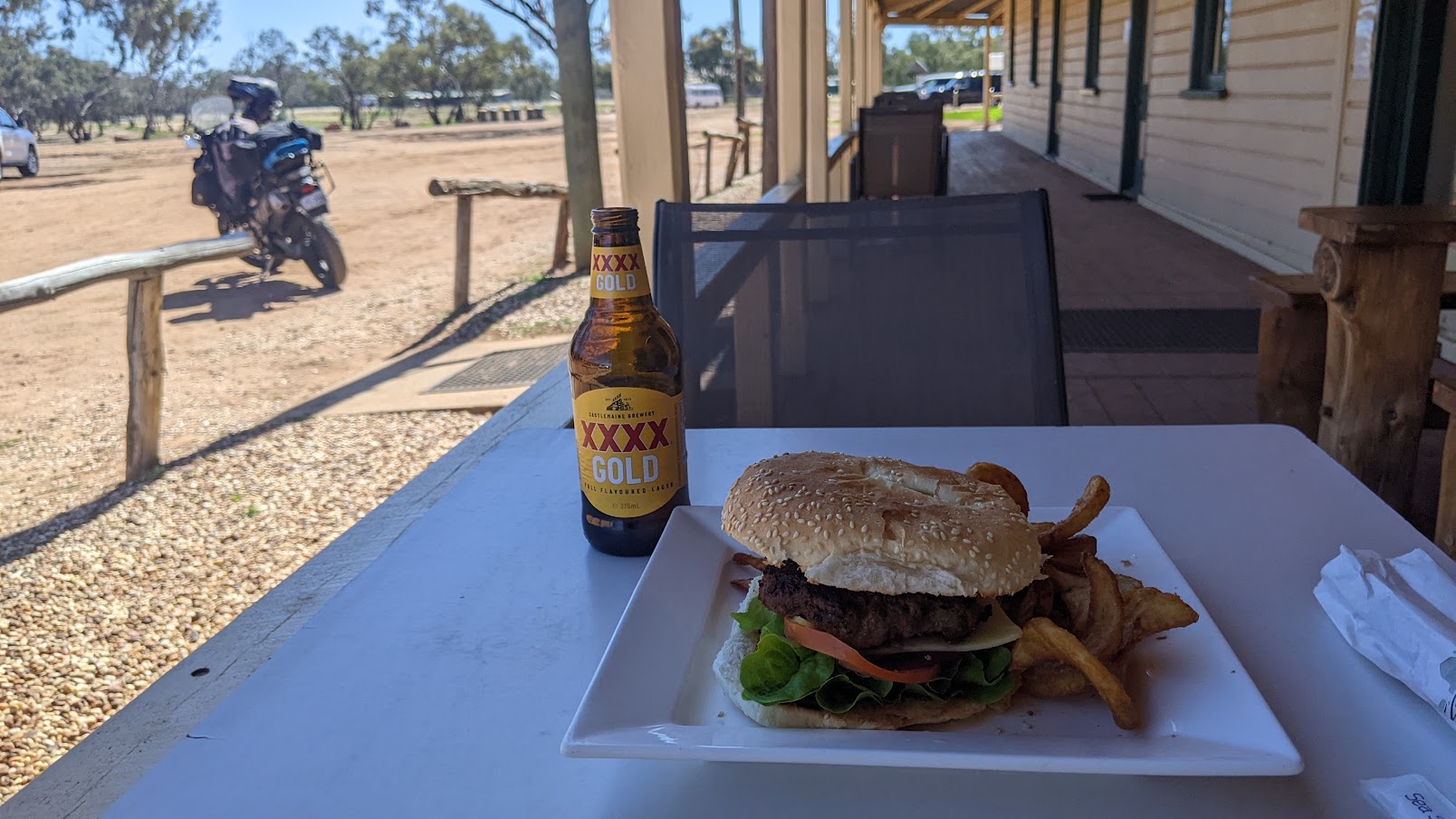 Just south of Nindigully is Thallon, which has it's own painted silos to give passing travellers something to stop and look at. 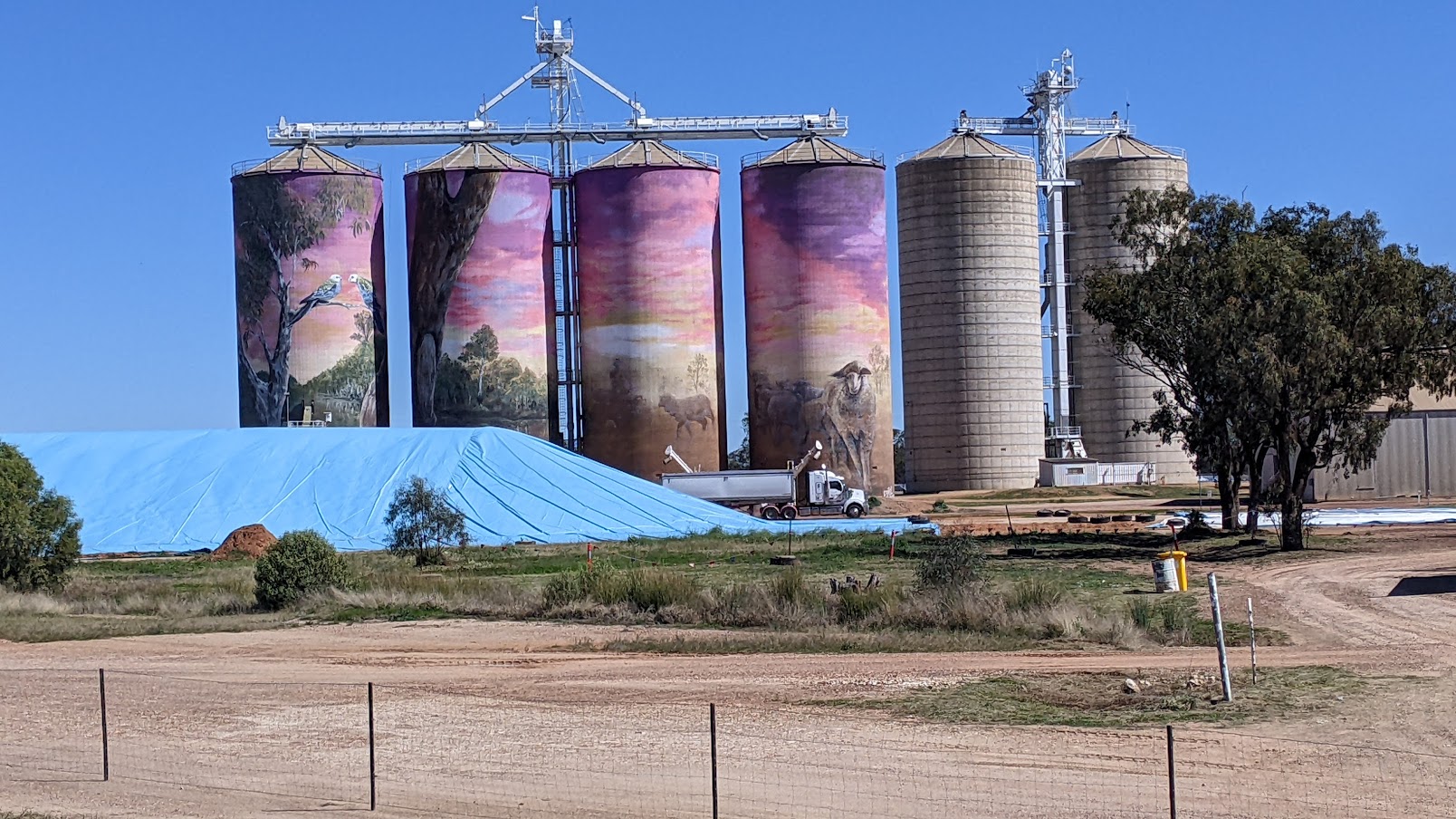 My next stop was at the twin towns of Mungindi NSW and Mungindi Qld, which is spread across the Qld/NSW border with residential and business located on both sides of the Barwon River. A total population of 750 spread across the two towns with about 80% living on the NSW side. Trivia, it is the only border town in Australia which has the same name on both sides of the border, and trivia #2, the adresses on the Qld side of the river have NSW postcodes. It is also probably home to the two closest police stations in Australia (perhaps the world) with the NSW police station only being about 250 metres away from the Qld police station over the river.

At the next town i check the distances to various places further down the Newell Highway and call the only motel in Tomgingley and book a room. The owner won't be there when I arrive so they'll leave the door unlocked and the heater on.

The next 5 hours are a steady ride south on the Newell Hwy. South of Narrabri the sun dips behind the hills, and the temperature plummets. I stop and put on all the warm layers I am carrying but not wearing, and continue. I stop at a noodle shop in Dubbo to buy a bowl of noodles which I put in my bag and carry another 50km to Tomingley, where, despite the cool weather, they are still hot enough to eat without needing to put them back in the microwave.

Friday was a photo-lite day. I woke up at 4am to the sound of rain belting down on the motel awning. At 5:30 i crawled out of bed and the rain was down to a light shower. I packed and paid my room bill in the office then headed off. It was almost right on 6am when I rolled out of town on the Newell Hwy, and the rain had almost completely stopped. It stayed overcast for a few hours and I rode through one small shower, but most of the water in my life was being kicked off the road by approaching B-doubles.

By 9am the sun was out and I stopped to apply sunscreen. It was still freezing cold so I kept all of my wet weather and cold weather gear on all day. The GPS (Garmin XT) includes live rerouting for traffic delays and road closures, and was quite insistent that I should head off the Newell, towards the Hume, or failing that, that I should detour at Narrandera out to Darlington Point, then head south on the Kidman Way, an addition of 30 minutes and 50km to the trip. Checking other sources like Google Maps and the NSW Traffic app showed that the Newell Hwy was indeed closed just south of Narrandera for a flooded creek. There was a detour in place, which added 2 minutes and 1km to the trip time. 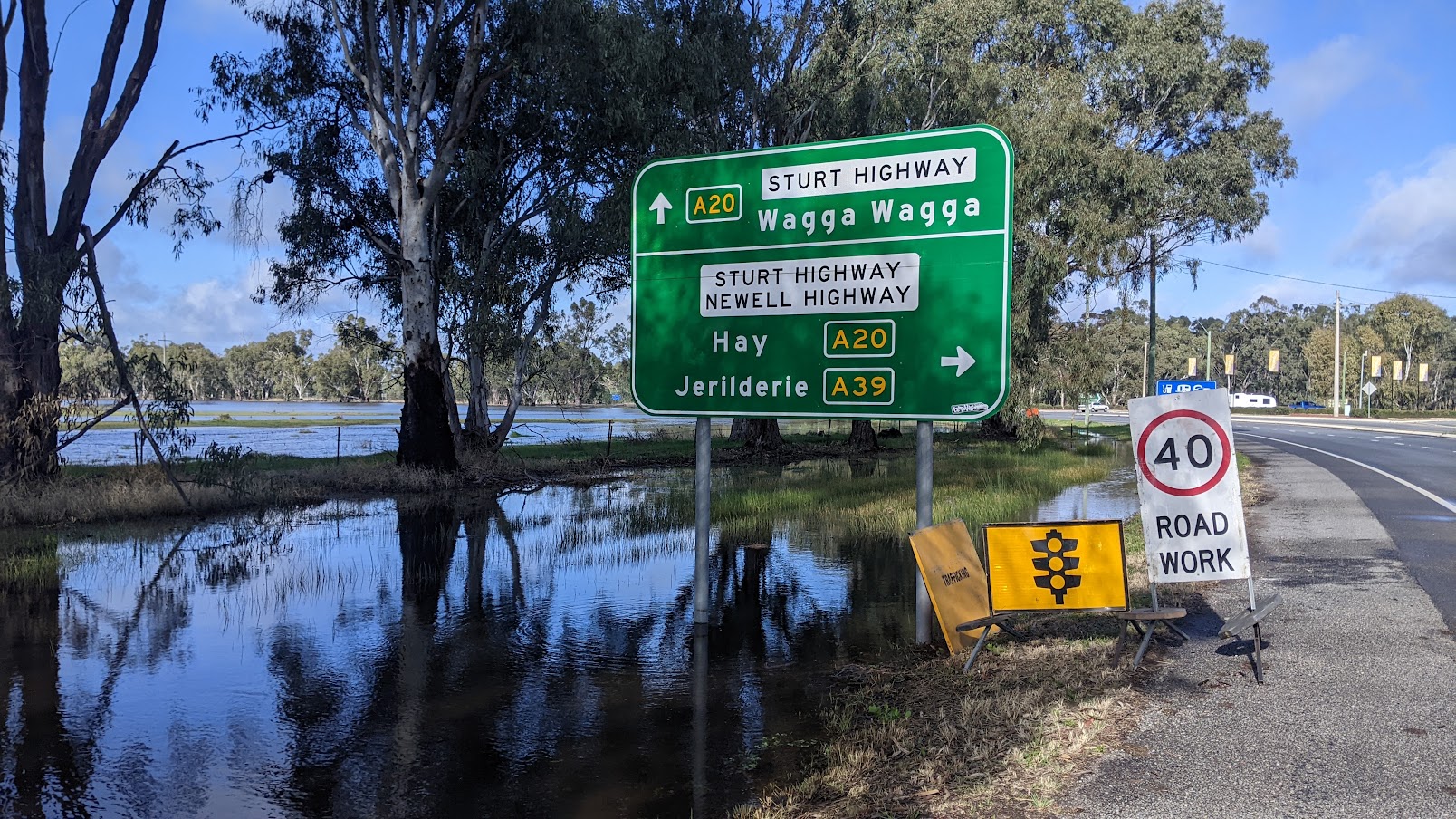 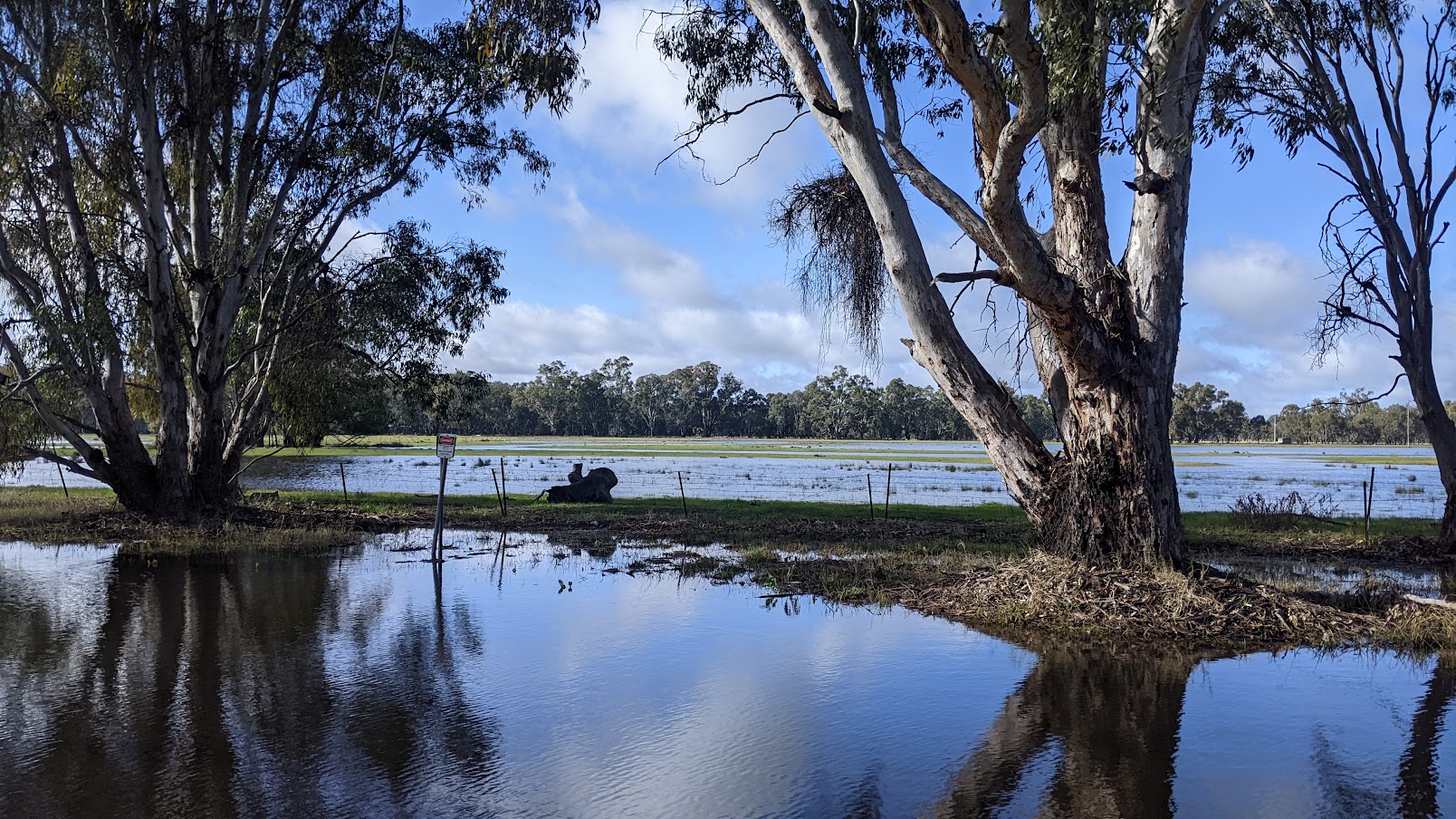 (is it just me or can everyone see a lion sitting on the grass with a koala on it's back in this photo?)

Aside from a few shops for a bite to eat or petrol, I rode straight through to home, and arrived mid afternoon, beating the afternoon peak hour on the ring road.

Amazing, what you can squeeze into 3 days! Glad you had a great time, Nev - and thank you for taking us along on your trip
And yes, it definitely is a lion with a koala on it's back

Getting the hang of it

Loved living vicariously through your post. Looks like a great few days of having a healthy (That's the opposite of a sickie just incase you were wondering )

Great thread of your whistle stop run to QLD and back. I used to do these distances but I was in a nice big, warm comfy B-Double (I know, I was a soft c**k) picked up a load of cotton bales just outside Mungindi to unload in Shitney next day and the damn GPS was befuddled by the 2 sets of postcodes and the duplication of street numbers and had me head scratching when I left from Goondiwindi to head out to what I thought was the never, never...lol. Roads in that part of the world aren't exactly 1st rate but spectacular country up that way. The flooding at Narranderra is something that happens maybe once every other year but the little detour they have usually sorts that out as it did for you. I gotta pull my finger out and get into some long rides again but Nev maybe not on your scale just yet...lol

Getting the hang of it